Last August 11, two Los Angeles police officers were involved in the fatal shooting of an unarmed black man, Ezell Ford. The shooting happened two days after the killing in Ferguson, Missouri of a black teen by a white police officer.  Similar cases around the country have made the issue of deadly force by police a hot-button topic widely covered by the media.

That’s why yesterday at the Times was an extraordinary day for my fellowship as I witnessed the “Digital First” mentality of the the news organization as it covered the Los Angeles Police Commission hearing into Ezell Ford’s killing by police. The hearing was held at police headquarters in downtown Los Angeles, one block from the Times office.  There were several staff photographers and reporters on scene. Updates were sent to the L.A. Now blog, which included texts, photos and an impressive Twitter feed that reported up-to-the-minute news from the scene, including photos. 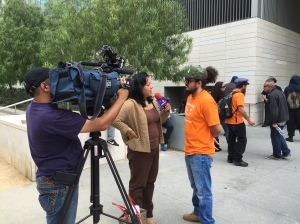 To the right you can see a reporter from Azteca America interviewing a protester outside police headquarters as the hearings were held.

I jumped into the coverage and used my Times employee badge to gain access to the hearing room. I  shot video with my cell phone to experiment with using a mobile device to report a story. I returned to the newsroom and worked with the video editor to edit the footage using the app Videolicious. The Times prefers using this app for quick-hit videos from the field, and I’ve enjoying experimenting with it.

My video of Ezell Ford hearing

Since I had several clips from scenes inside and outside of police headquarters, I found the app limiting to creating a more detailed video story. The editor suggested that I try the iMovie app on my phone. This was more successful and I produced a one-minute video of my clips that told a story of the morning. I learned a lot from doing this! I will definitely aim to have students use cell phone video apps in my multimedia and media production classes.

In the afternoon I returned to the hearing room as the assembled media awaited the decision by the police commission. It was interesting to note the large number of local broadcast crews who were present.

I chatted for a bit with Times photographer Ifran Khan. He has a long background in still photography but has embraced video as well. When shooting stills he uses a professional camera, but when doing video he uses his iPhone. It can be daunting for a news photographer to decide when to shoot stills or video when covering a breaking story such as this one. Khan managed to successfully do both as his photos and video clips were published.

Khan clearly enjoys making short videos using Videolicious. He explained that interview subjects often are more relaxed when he shoots video using his cell phone, so he can get them to be more natural on camera and get a better story.

To the left you can see Khan with his iPhone prepared to shoot video when the commissioners returned to the hearing room to announce their decision.

After the hearing ended I took all my footage from the day and used my laptop with Final Cut to edit a 90-second video story and sent it to the video editor around 8:30 p.m. Looking forward to hearing his comments today.

Here is the Times’ cover print story with Khan’s photos.

The clanging of the bell signaling the opening of the Grand Central Market in downtown Los Angeles, and a strong latte from G&B coffee, jolted me awake this morning. I am downtown to learn about how modern digital newsrooms are run, of course, but that can wait as I take in the modernized Grand Central market, which has added hip new spots such as Eggslut. The egg-happy eatery already had hungry diners chowing away at its counter as I passed through the market to Broadway Avenue. Then it was over to Spring Street and the Los Angeles Times headquarters.

Five other interns are starting this morning and I’m grouped with them as a “visiting fellow,” although my prime intern days were well before this crew was even born. They are all still in college.

We are greeted by Tracy Boucher of the Times and whisked upstairs. Right into the thick of things, it seems. It’s the morning budget meeting where top editorial staffers, led by editor Davan Maharaj, will assess the day’s stories and how to play them on the company’s many digital and print platforms.

We are introduced to the editors before the meeting starts. The interns are obviously going to be producing content this summer, but my role as a visiting fellow is more ambiguous. “Can we put him to work while he’s here?” Maharaj asks Boucher.

He’s joking but maybe not. The Times, like many newsrooms, could certainly use the help after years of staff downsizing. The need is even more critical during summer months when remaining staffers are apt to be vacationing.

And there’s certainly plenty of news to cover for the the Los Angeles Times.

Generating considerable buzz at the morning meeting was the just-released Vanity Fair cover story on Bruce Jenner’s transformation to a woman. Editors mapped out several responsive stories including one about local reaction from the transgender community.

The Times, like most digital companies, monitors its audience, and editors took note of which of their stories were generating digital noise. Two stories of note were the hard-hitting piece on  Los Angeles entrepreneur Elon Musk and another one about a Northern California woman donating an old Mac computer to a Silicon Valley recycling center that was actually a valuable piece of computer history worth close to $200,000

We toured the two main newsroom floors and lobby area, glimpsing two relics of a pre-digitial past, including the paper-based clip files in the library, on the left,  and the bank of abandoned pay telephones booths in the entrance way.

You can tell the Times is firmly in the digital age though, with a converged newsroom with print, online and video productions in full swing, and teams of staffers devoted to areas such as interactive web graphics, social media engagement and data journalism. Looks like I’ll be in good hands this summer. 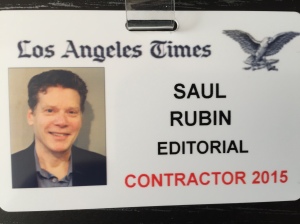 The last time I worked full-time in a newsroom, Bill Clinton was in the White House, everyone was terrified of Y2K, and The Blair Witch Project was the hot movie. The height of technology was the dial-up modem that allowed you to connect, after several frightful minutes and not always with success, to the mysterious informational realm of the world wide web.

I left full-time journalism when I was hired in 1999 to a tenure track position teaching journalism at Santa Monica College. Since then I’ve taught hundreds of journalism students at SMC while watching the field of journalism churn through monumental changes. I’ve kept up with these shifts, of course, and adapted curriculum changes as needed. But reading journalism-related blogs, attending journalism conferences and holding annual advisory board meetings with local professionals just wasn’t enough to keep up with the rapid pace of change.

That’s when I heard about a very special program offered by the International Center for Journalists called the Back in the Newsroom Fellowship. ICFJ’s fellowship program takes educators at colleges with large Latino populations and places them in cutting-edge digital newsroom in the United States. The goal is to give them a close-up view to how media companies are creating and distributing their content so that educators could take these practices back into the classroom. The overall goal is to increase diversity in the newsroom.

I was accepted into this program in mid-May, 2015. I’m preparing to spend nine weeks inside the Los Angeles Times beginning June 1.  Before that I will travel to ICFJ’s Washington D.C. office for two days in late May for program orientation and a chance to meet the five other journalism teachers selected to the program.

With this blog I hope to share my experiences as I step back into a newsroom for the first time since dial-up modems were all the rage.